Much like poutine, politeness and Paul Anka, pond hockey is a proud Canadian institution. From Bonavista to Bella Bella, Canadians grow up waiting for the ice to freeze and then gliding onto those newly formed ponds to play our favourite sport. Prairie-dwellers often jump at the chance to get outside and enjoy the sunny, crisp winter days.

But as we have learned over fifty years tracking the health of lakes at IISD Experimental Lakes Area—the world’s freshwater laboratory—climate change is affecting Canada’s winter lakes and ponds. And the next fifty years are likely to see further change, according to ClimateWest—a hub to help the Prairies adapt to a changing climate.

And that spells bad news for pond hockey fans across the Prairies. Here are just five reasons why.

IISD-ELA has been tracking the date lakes freeze over since 1969 in northwestern Ontario. We call this special day “ice-on.”

On average, this ice-on date has been getting later and later—in fact, by 1.66 days per decade.

That means pond hockey season has been starting later each year. 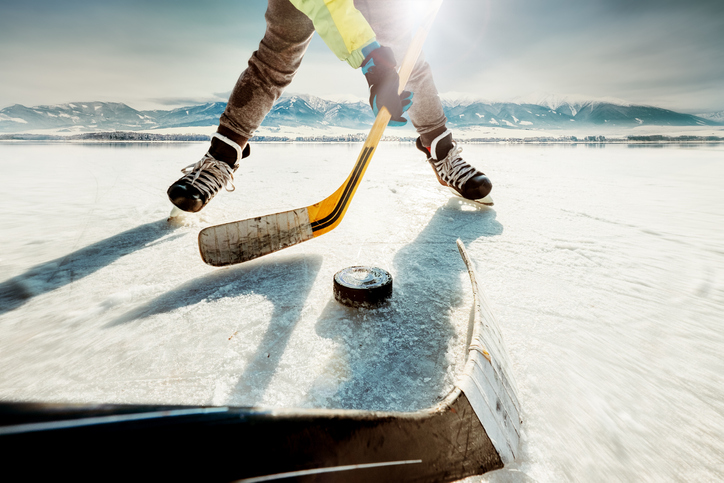 Millions of Canadians wait for ponds to freeze over every winter so they can play some hockey with their friends. But it looks like climate change might have other ideas…

2) Lakes Are Frozen for Less Time

Guess what IISD-ELA found when we compared how long lakes were iced over during winter in 1969 vs now? Since 1969, lakes have been frozen over for an average of 18 days fewer (at a rate of 4.24 days per decade).

And it is expected that the number of days of pond ice will continue to decrease in the Prairies if we don’t curb greenhouse gas emissions. ClimateWest, which exists to help the Prairies adapt to a changing climate, knows how we can best predict the impact of climate change on future generations.

Future climate scenarios that consider backyard ice conditions show that the number of days you can skate outside will decline by 19% in Calgary alone from 2015 to 2090.

Yep, that means almost two and half weeks less of pond hockey per year in our kids’ lifetimes.

Remember those already vanished 16.7 days of ice? Well, according to the Climate Atlas, if emissions levels do not change, winters in the Prairies will get even shorter—by 10-20 days by 2050! This means in most people’s current lifetimes, no matter where you live in the Prairie provinces, the winters you experience will be milder than those of your parents and grandparents.

This spells terrible news for pond hockey fans, but also for flora, fauna and millions of people who depend on lakes and cold weather for their lives and livelihoods. 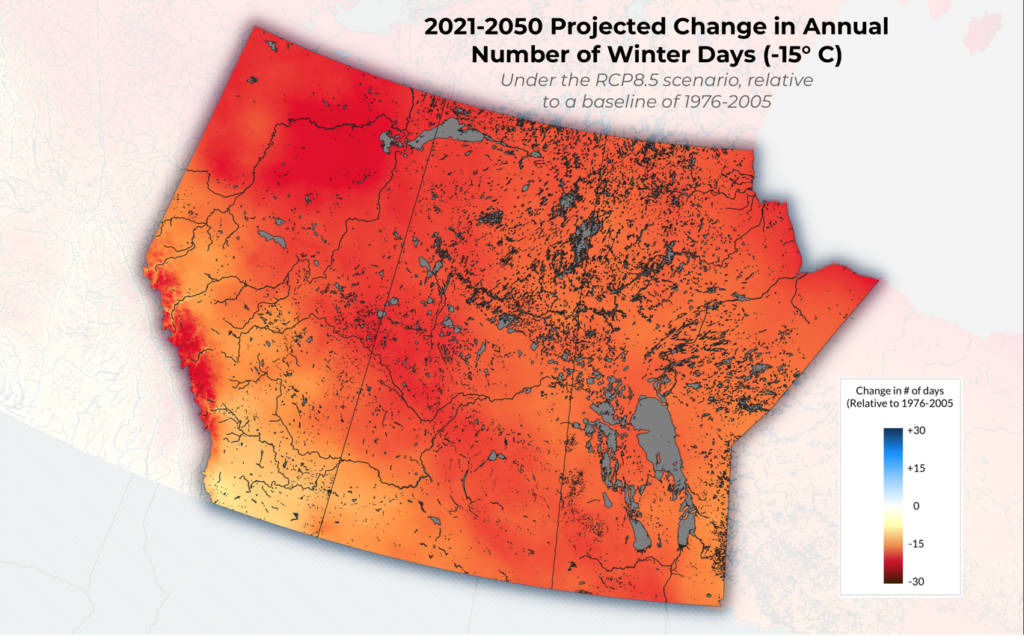 This map shows how many fewer annual “winter days”—days when temperature drops to -15° C or cooler—that the Prairie region is projected to experience on average over the next 30-year period, compared to a 1976-2005 baseline. The number of winter days in a year is a good indication of how long and how cold the winter is. The emissions scenario used is RCP 8.5, which is generally selected for long-term planning purposes. Photo credit: Prairie Climate Centre.

Thanks to climate change, we expect more winter rain than in decades past on the Prairies.

Less dependable snowfalls, or events where it rains after it snows then freezes, may lead to less snow buildup and the increased flow of water in streams and rivers—all contributing to poor quality, or unsafe ice conditions. Good ice safety practices will become ever more important to practicing our traditions of pond skating, backyard rinks, and pond hockey.

As temperatures and precipitation levels swing between extremes throughout the winter, it may feel as if you have “weather whiplash”!

One minute, milder weather may risk melting ice, while the next minute, temperatures will be way colder than you expect.

Both extremes will affect your beloved pond hockey as warmer temperatures can cause thaws and slush, while below normal temperatures bring increased risks of hypothermia and frostbite.

Join The Fight Against Climate Change

ClimateWest and IISD Experimental Lakes Area had joined the Save Pond Hockey Event in Stonewall, Manitoba February 18-20. A Climate and Sport Initiative created to educate, engage and empower Canadians to protect our planet for future generations. Although the event has been postponed due to COVID-19, we want you to know there are still opportunities to raise awareness and get involved to save our beloved past time.

Want to learn more about the impact of climate change on our lakes—and what you can do about it? Visit iisd.org/ela.

Want to learn how you and your community can adapt to the changes in Prairie winters? Contact ClimateWest’s help desk, email us at info@climatewest.ca or call (204) 995-6514.